Any eighteen year old not going to uni will understand that sinking September feeling you get after finishing school.  I had a great summer celebrating and suddenly, like that September was at my door and people were off to University.  I had absolutely no idea what I was going to do. My mum had started nagging me about finding a job and I was starting to wonder if maybe I should have gone  to university after all. So I started my search for a job. That’s when I really started to think, this is it. I’m an adult in the big bad world now, this actually matters.
Does making the choice of not going university make me a loser? Was I destined to go nowhere for the rest of my life?

I got online and pretty quickly stumbled upon www.notgoingtouni.co.uk, one of the first things I saw on it was Pret’s School Leaver programme. Yes, I know it’s a cliché but it was a genuine lightbulb moment. Is it for people who actually want to go somewhere in life? Tick. Is it about pursuing a career in retail management? Tick! I raced onto the site and downloaded the form; praying that I hadn’t missed the deadline. Thankfully, I got a very nice response back from Kate, the manager of the programme, saying that the deadline was the next week and she would take a look at my application.

After a quick telephone interview I was off to an assessment day, donning a pair of glasses that I hadn’t worn in years in a last minute effort to make myself look more intelligent. I thought I’d done my research but found myself hearing things from the other candidates about the business that I had absolutely no idea about. One boy really stood out, this was Alex, who reminded me of someone from ‘The Apprentice’ spewing out obscure facts about the business and generally being all round impressive.  I tried my best to speak up and make an impact, as all the extra stuff Kate was telling us was just reaffirming the fact that this really was a great gig, but I had absolutely no idea whether I was still a contender. Waiting for the next couple of days for the call felt like the next couple of years. But finally I found out I had done it. I was in!

Since then I can safely say it’s been a real learning curve, from trying to make one hundred and fifty sandwiches in two hours, to making Londoners coffee in the morning rush for the first time, to picking up Spanish from my teammates! And I can’t forget to mention the fact I got to meet Boris Johnson, what a hero.
I think the biggest thing that I have taken out of this year is gaining both confidence in the workplace and in myself. Going from full time education to full time work is quite a daunting prospect, especially having never had a proper job before. Learning how to deal with others who are older and wiser than me as well as make myself heard and respected is something that comes from hands on experience.

I am a bit of a party animal and with so many of my friends going off to university I worried that I wouldn’t have any left and would just be stuck working, sleeping and eating like some kind of Pret robot. I couldn’t have been more wrong. From the beginning Kate helped the school leavers get to know each other as a group, by having us spend our first week at Pret together and by holding regular social events. We then spent time together at our workshops and it was so nice to just be able to share our experiences. Some of my best friends are school leavers; in fact I’m having a joint birthday party with my friend Alex from the scheme next week. Remember Alex? The Apprentice type guy from the interview I told you about? Well he got on to the scheme as well has actually become one of my closest friends. He wants to be in management position by the time he’s twenty and none of us doubt that he will. He’s already well on his way to being a Team Leader in less than a year which is a really quick progression.

This leads me nicely on to Friday Night Drinks, the three best words a Pret employee can hear. Free entry to a big club in Central London, exclusively for Pret people and £1.50 drinks. It’s great because I’ve built quite a network of friends in Pret throughout the year. There’s the staff from the shop I worked in, those on the school leaver programme and Head office people too. What better place to catch up with them all than Friday Night Drinks?

I can’t really write being a school leaver without mentioning Kate, the fairy godmother of the program. Kate came into shops every couple of weeks to see what we were doing and made sure we were being looked after. She’s helped us move shops, get the promotions we want and generally helped us to progress.

The Pret School Leaver programme has given me direction. I have gone from being an eighteen year old with no idea what she wanted to do with her life, to knowing exactly what path I want to take. I think about my friends at university, they’re going to come out in 3 years’ time with a load of debt and no job, who knows where I’ll be but I’ve already started climbing the ladder. I like being able to tell people with pride what it is I do, how young I am and how far I’ve come in this year. 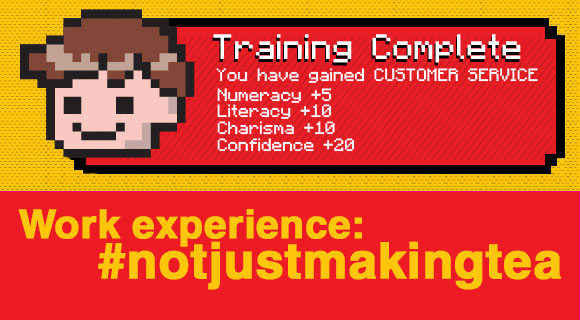