What can employers and employees do about youth unemployment?

The latest unemployment figures published in October showed a welcome fall in the number of people out of work, with youth unemployment retreating below the 1 million mark, falling by 62,000. While that points to a step in the right direction, it remains the case that around one in five 16 to 24-year-olds are jobless.

Young people, it seems, are still bearing the brunt of the economic slowdown. 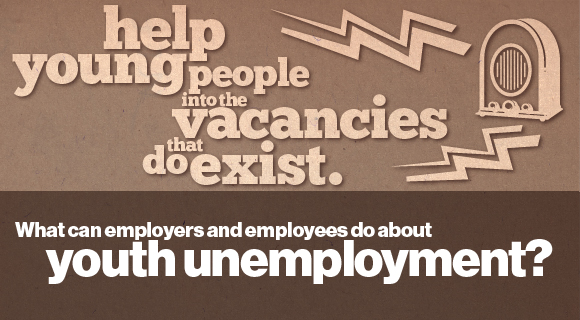 But what is the reality for young jobseekers and employers? Both face a daunting challenge with the labour market at its toughest for decades. In a bid to understand more about the reality of job-searching, the JRF, with the Universities of York and Warwick, tested whether applicants from more deprived areas were being ignored because of postcode discrimination.

On that front, the report findings that came back were heartening. Despite public perceptions that employers discriminate against residents from neighbourhoods with poor reputations, the study found no significant difference in response rates for applicants from areas with poor reputations versus those with ‘bland’ reputations.

The study interviewed employers and young jobseekers, analysed vacancy data and experimentally sent in around two thousand job applications by relatively well-qualified, fictional candidates to 667 real jobs (such as sales assistants, cleaners, office administrators and kitchen hands). These were spread across three different labour market areas in Britain (one strong, one weak, one in-between). By delving into the world of young jobseekers, we discovered some major issues for both would-be workers and employers.

Clearly this points to problems with labour demand in the economy. But there are things that can be done to help jobless young people into the vacancies that do exist.

To increase their chances, jobseekers need sound intelligence about their local labour market and employer recruitment practices, supported by Jobcentre Plus advisors. However, recruitment methods varied considerably between job type, area and employer. Some notified vacancies to Jobcentre Plus; some used their own or private websites. Most used the internet in some way. Jobseekers must find out as much as possible about employer recruitment behaviour, where vacancies are advertised, and how jobs are filled in their local areas.

Better qualifications, better CVs and an increased speed and volume of job applications will enhance the position of jobseekers. Jobcentres and employers could help jobseekers by taking vacancies off their own websites as soon as they are filled. Lack of response to applications and feedback from employers sapped the confidence of many jobseekers, allowing ill-targeted applications to be repeated. Employers should provide some kind of feedback.

These recommendations are in tune with those published by UKCES in July as part of their Youth employment challenge report, where employers are encouraged to adopt youth policies. The JRF research also points to deep problems in the understanding of jobseekers of how employers are recruiting in low-paid labour markets; and vice versa. The issues now are  the way that employers seek out or treat young people within their business and especially the unintended consequences of their recruitment practices on the morale and effectiveness of those looking for work.